The change in climate has been affecting sport enthusiasts in soccer, cricket, and golf whose playing-scapes have been made too soggy to play on, and rising sea levels from melting ice in Greenland to the Himalayas are causing the erosion of coastal golf courses in Scotland.

The Weather Network posted a Reuters report yesterday that mentioned six out of the seven wettest years on record in the UK have been since the year 2000. Piers Forster who is a professor of climate change at University of Leeds contributed to the study told International News Agency, Reuters, "Britain is particularly susceptible to storms coming in from the North Atlantic."


The above illustration shows the flow of the North Atlantic current, its branches, and the flow of water it crosses paths with off the coast of UK.

Despite all these things that may pique curiosity for climate geeks and potential research project on the horizon, clearly not everyone feels the same way about this information: 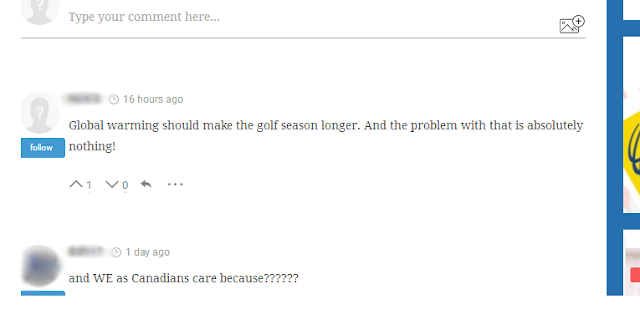 Ok, I'll admit a cry of "the soccer fields are soggy" sounds trivial on its own and may cause flashbacks of schoolkids disappointed with the "tarmack-only" recesses.

And to be honest I don't even like golf. (There, I said it.)

Nevertheless there is a point to acknowledging this. It just seems like an interesting climate-related observation that everyday people like you and I might actually be seeing. If you or I frequented such fields, and that is assuming you are an 'everyday person' like me which might not be true in this context, but anywho... you probably get where I'm going with this. It's readily observable, and helps contributes details to an ever-so-slightly bigger-picture perspective.