Highlights From the Blue Dot Tour

This Friday I had the wonderful opportunity to attend the Blue Dot Tour at at Massey Hall in Toronto. This is said to be David Suzuki's last national tour, and it highlights the importance of implementing The Right to a Healthy Environment in Canada.
It was an inspiring and memorable evening with many passionate speakers and performers with tons more takeaway points, but I'd like to share just a few of the many highlights. (Despite being read out at the beginning, I didn't catch all the names so I apologize for omitted and mistaken ones). 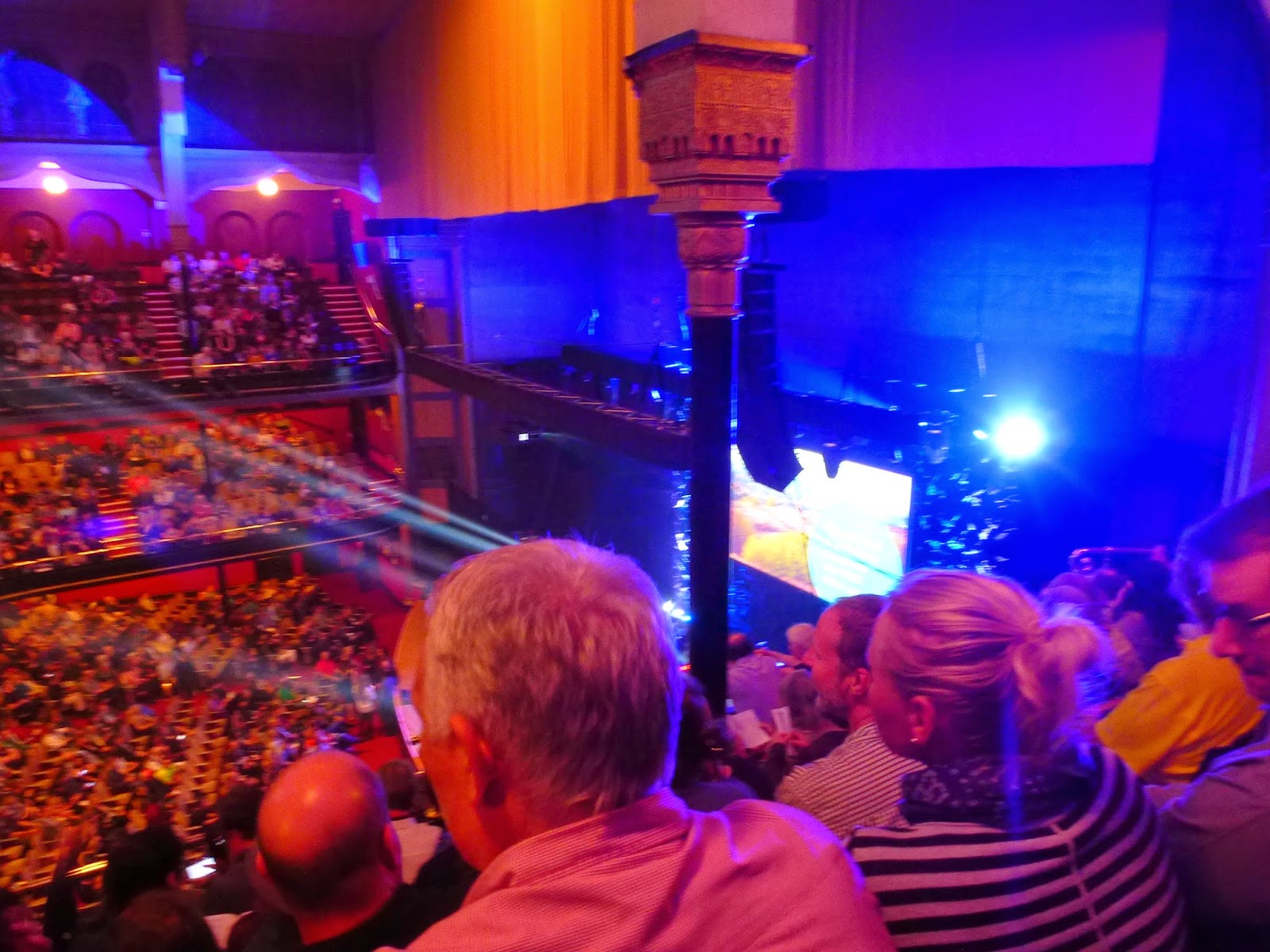 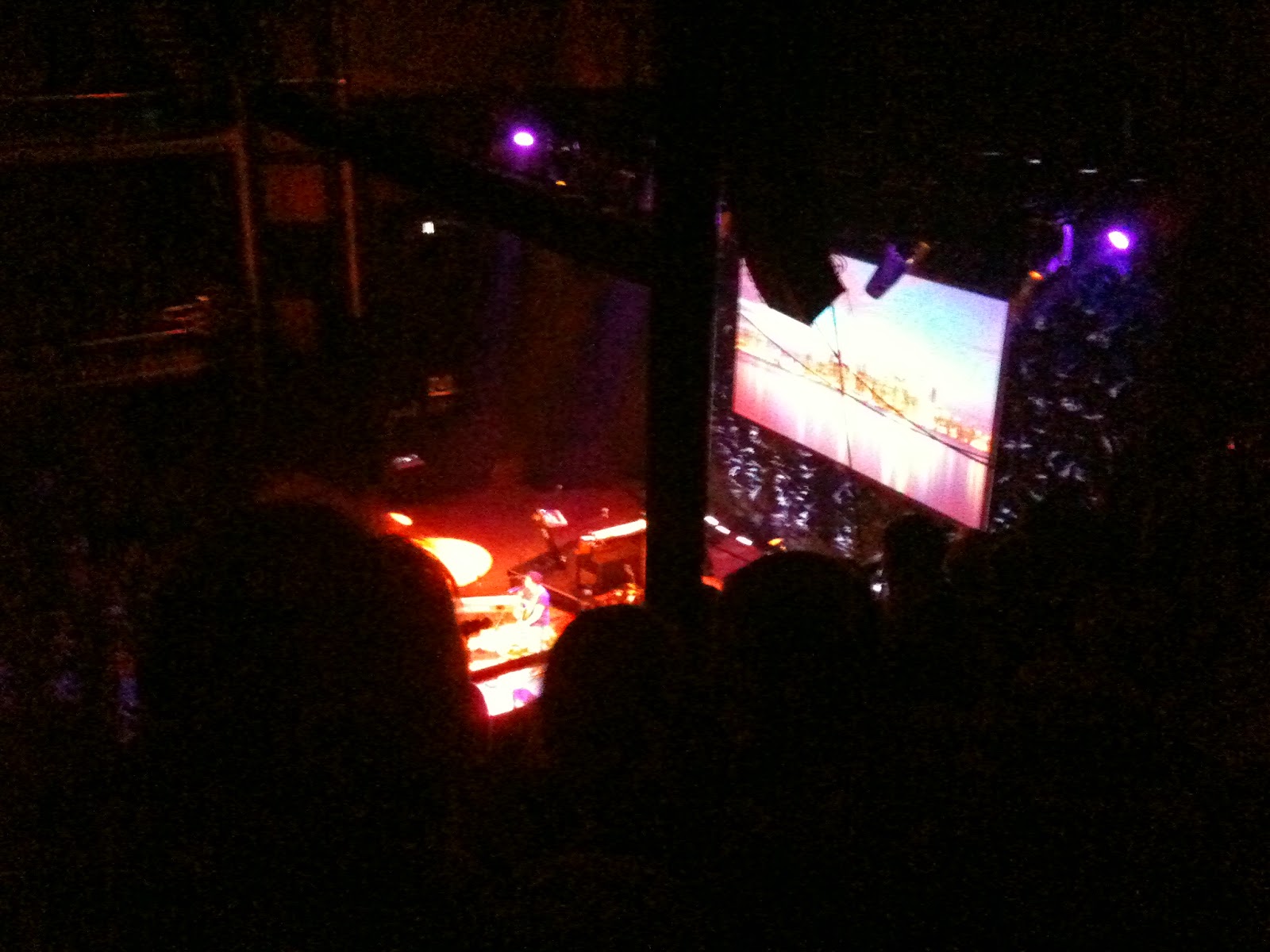 An acoustic rendition of Danny Michel's "Feather, Fur & Fin" was a terrific way to open up the performances, describing how destruction and pollution of natural habitats effects other animals through music, a memorable way to reach peoples' hearts.

Here is the Official video for "Feather, Fur & Fin" by Danny Michel: 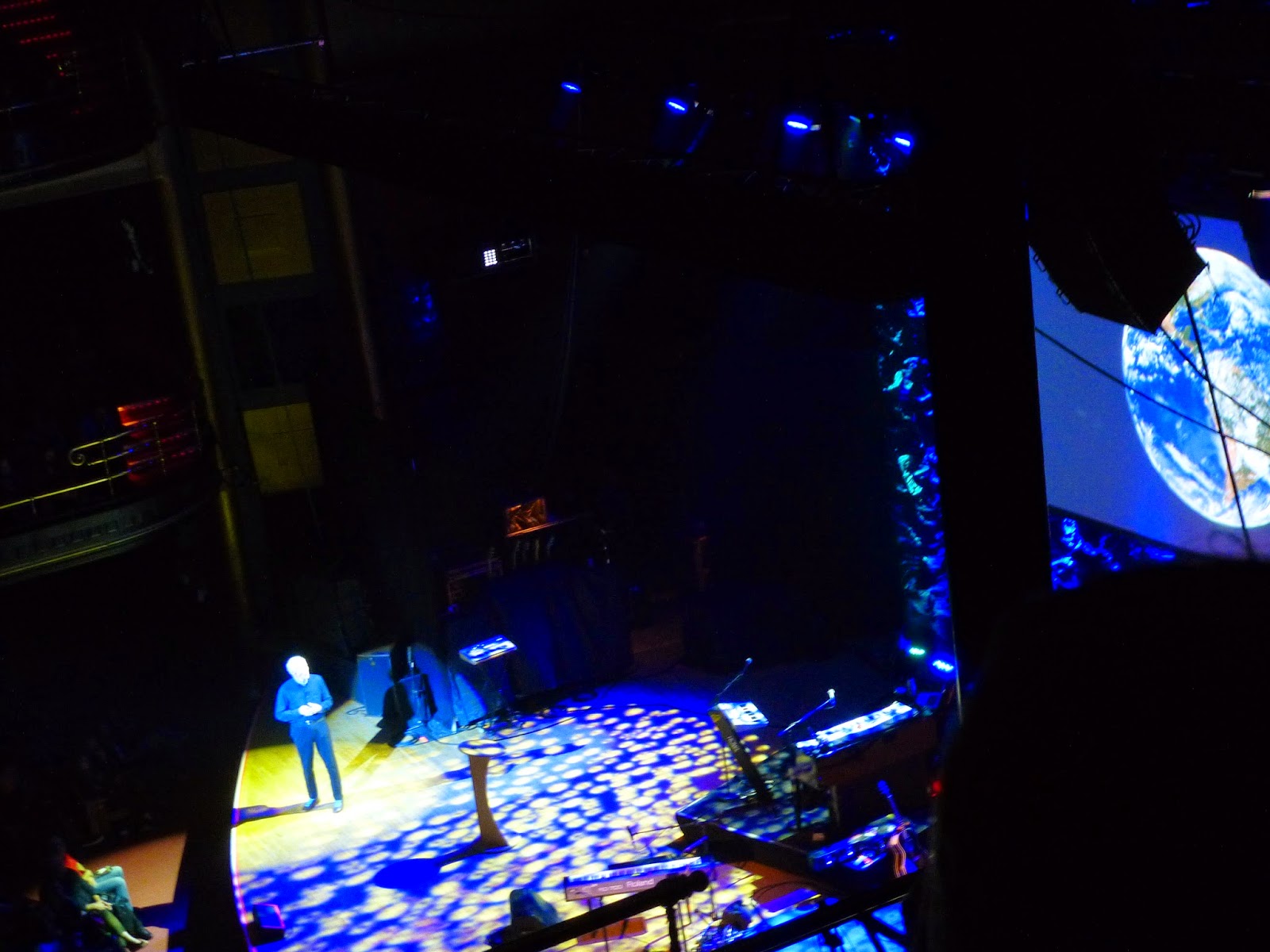 Dr. Joekin (?), a scientist and explorer, spoke on behalf of the sea, the lifeblood of the Earth, and all creatures depending on it in "Voices from the Depths of the Sea". His speech itself included both reason and a soft but deep passion, attesting to the fact that the two go hand-in hand to drive great change, inspiration, and leadership. 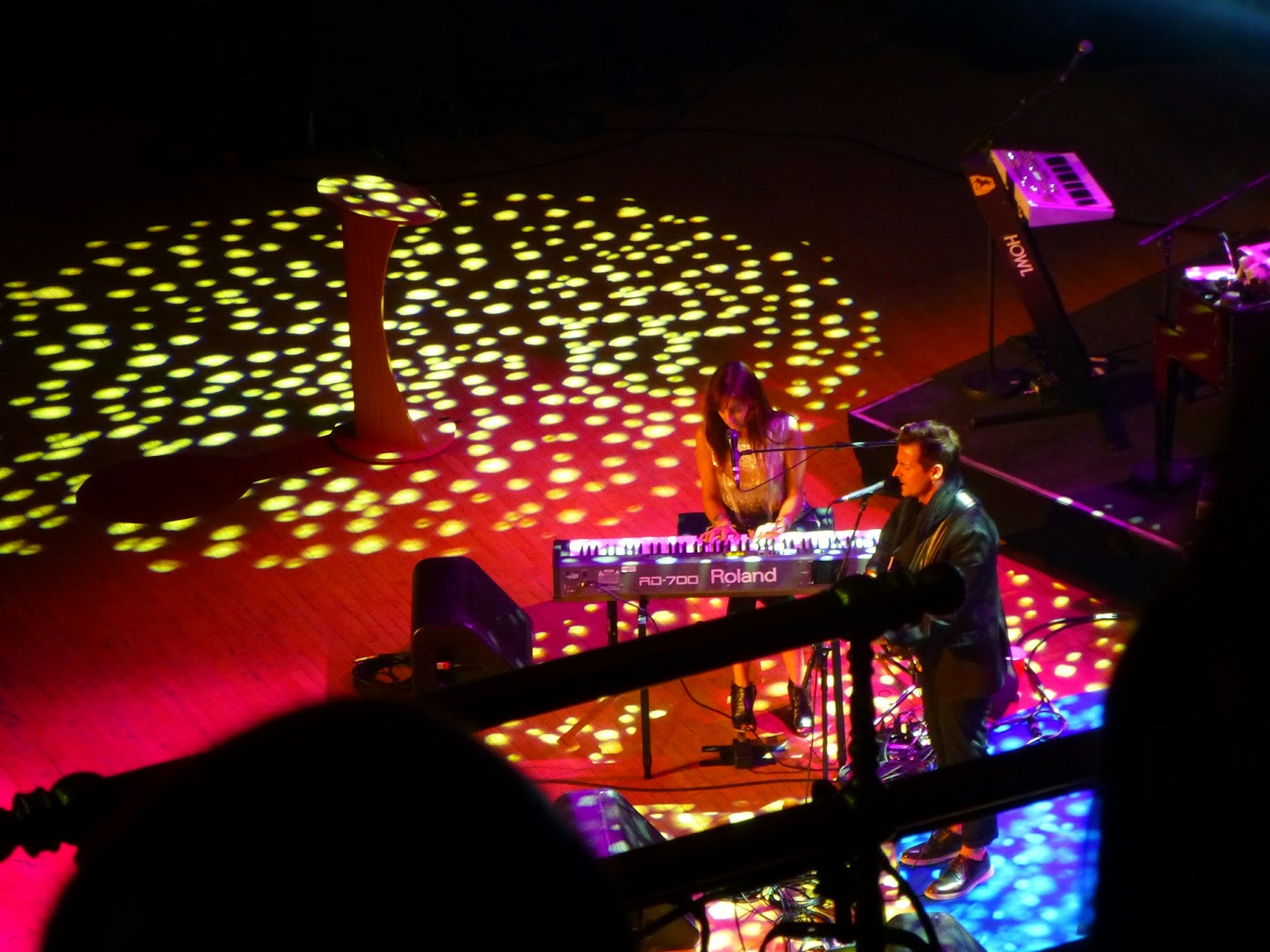 Chantal Kewviazul and Raine Maida giving a heartfelt performance (I could not get the violinist or cellist in the picture or their names, but they all sounded great together!) 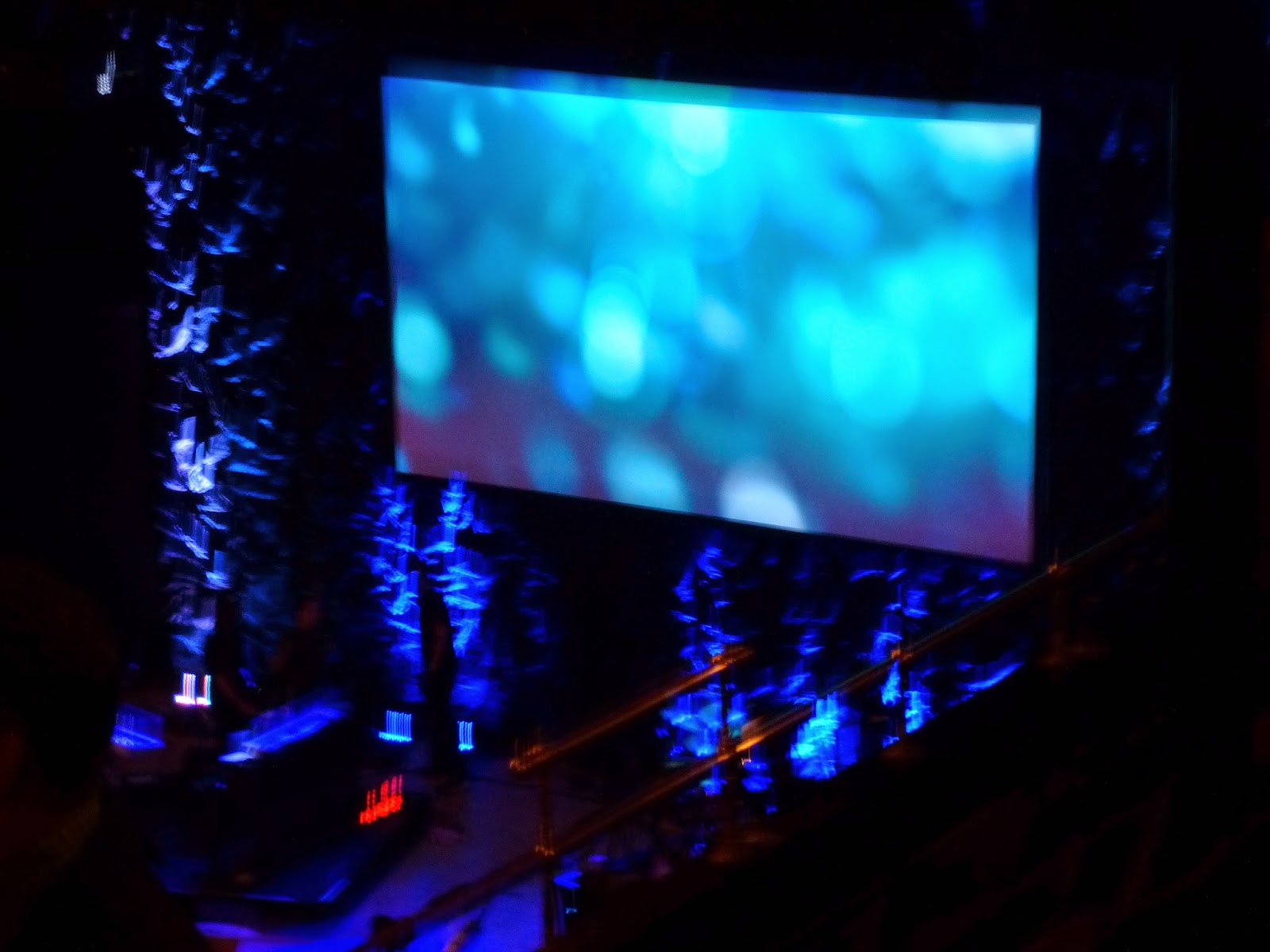 Devin Paige was also not visible from this spot, but the executive director of EcoJustice (a company that fights legal battles for environmental causes) highlighted the legal aspect of the right to a healthy environment. He also said that at EcoJustice they tend to separate people into 2 categories: people who will sue for the environment, and people who won't. Stephen Lewis' eloquent and sarcastically "dispassionate" speech described how the environmental movement/action taken by organizations such as the David Suzuki Foundation are in harmony with international goals, and is for the benefit of people. 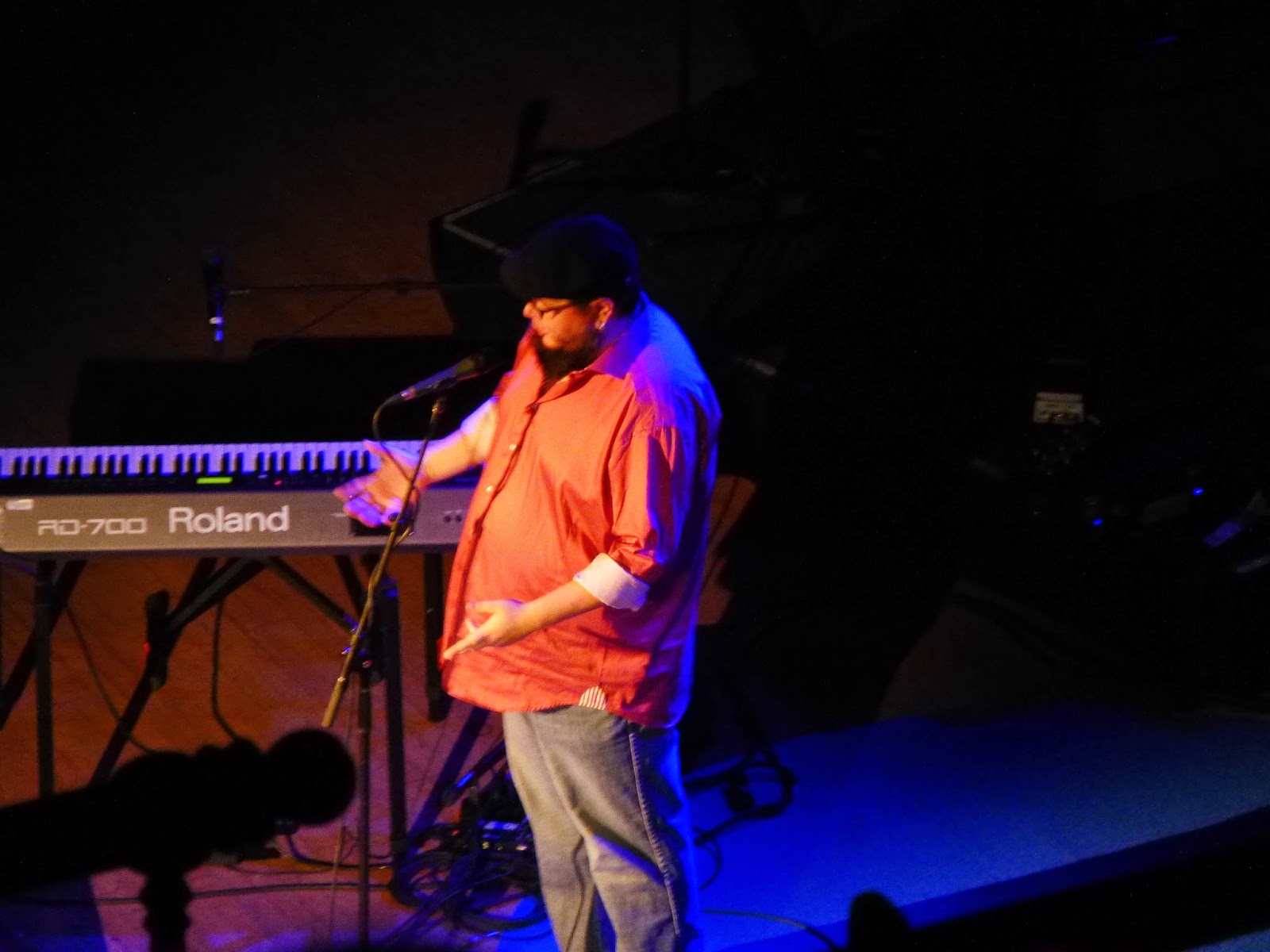 Following was a chilling and touching spoken word poem "Shoulders" written for the Blue Dot Tour by Shane Koyczan, a speaker/performer who combined the best of both worlds and words. As an avid lover of poetry and creative writing, this was definitely a highlight and I could go on about the beautiful words that seemed to flow so naturally, but I don't want expectation to spoil/interrupt the current of thoughts for those who will be hearing it later. What I can say is that the standing ovation was well deserved. 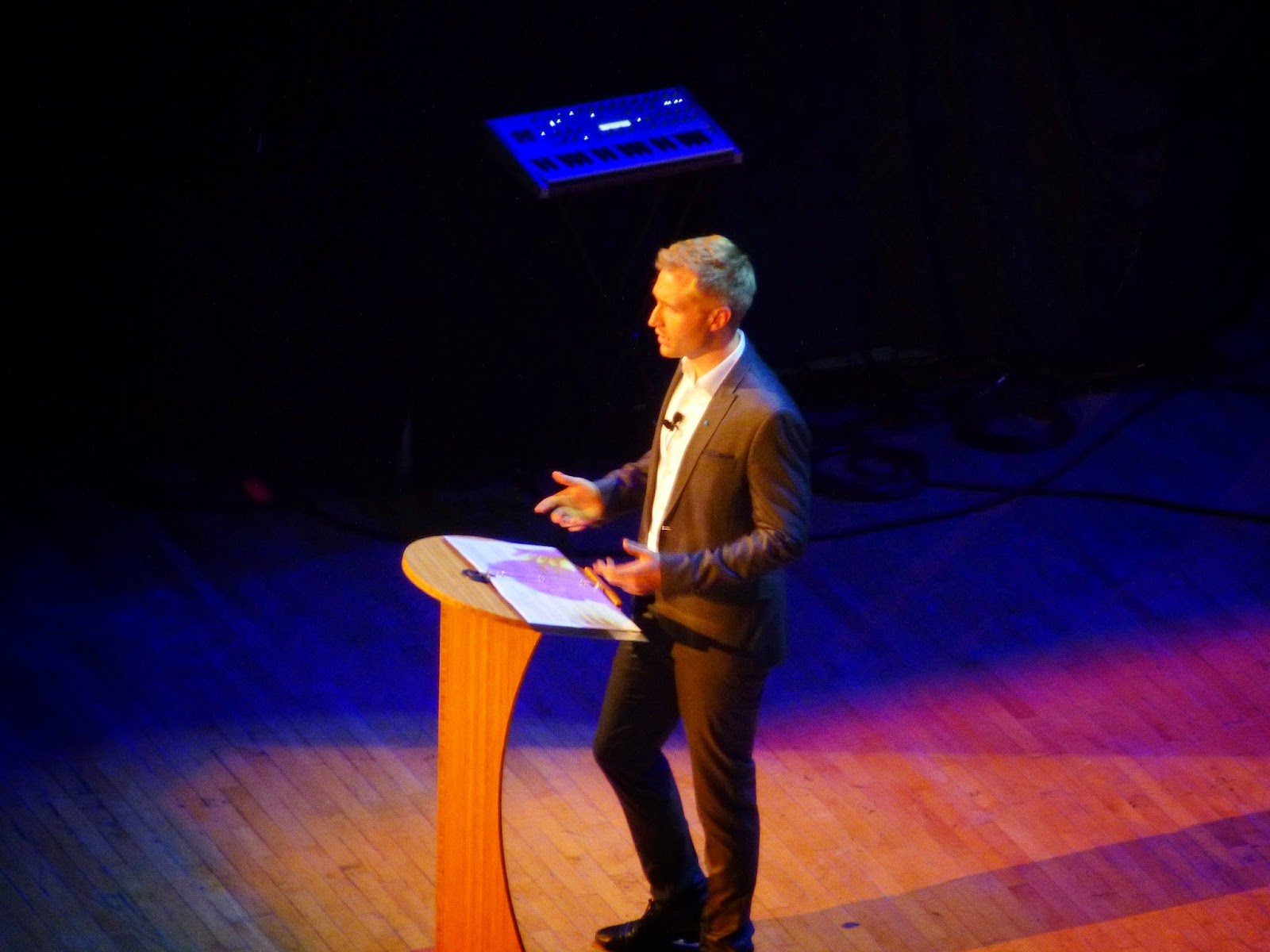 Michiah Prull, Director of Communications and Public Engagement gave a genuine, empowering speech that included the phrases "ordinary people doing extraordinary things", and "don't be a spectator of your own life". the truth that while most of us consider ourselves ordinary, we can be involved in the extraordinary. He also invited the audience to physically stand to give a memorable illustration about the power of standing together for the right to a healthy environment.

Upon return from intermission I missed the speaker's name, but a man spoke about role of Native Canadians as stewards of the land. He sang a traditional song which set a beautiful atmosphere, and shared an experience of when a friend -who is also a Native of Canada- was asked something to the effect of "what do you need more land for? When are you going to sell it?" The response: "We are preserving it." 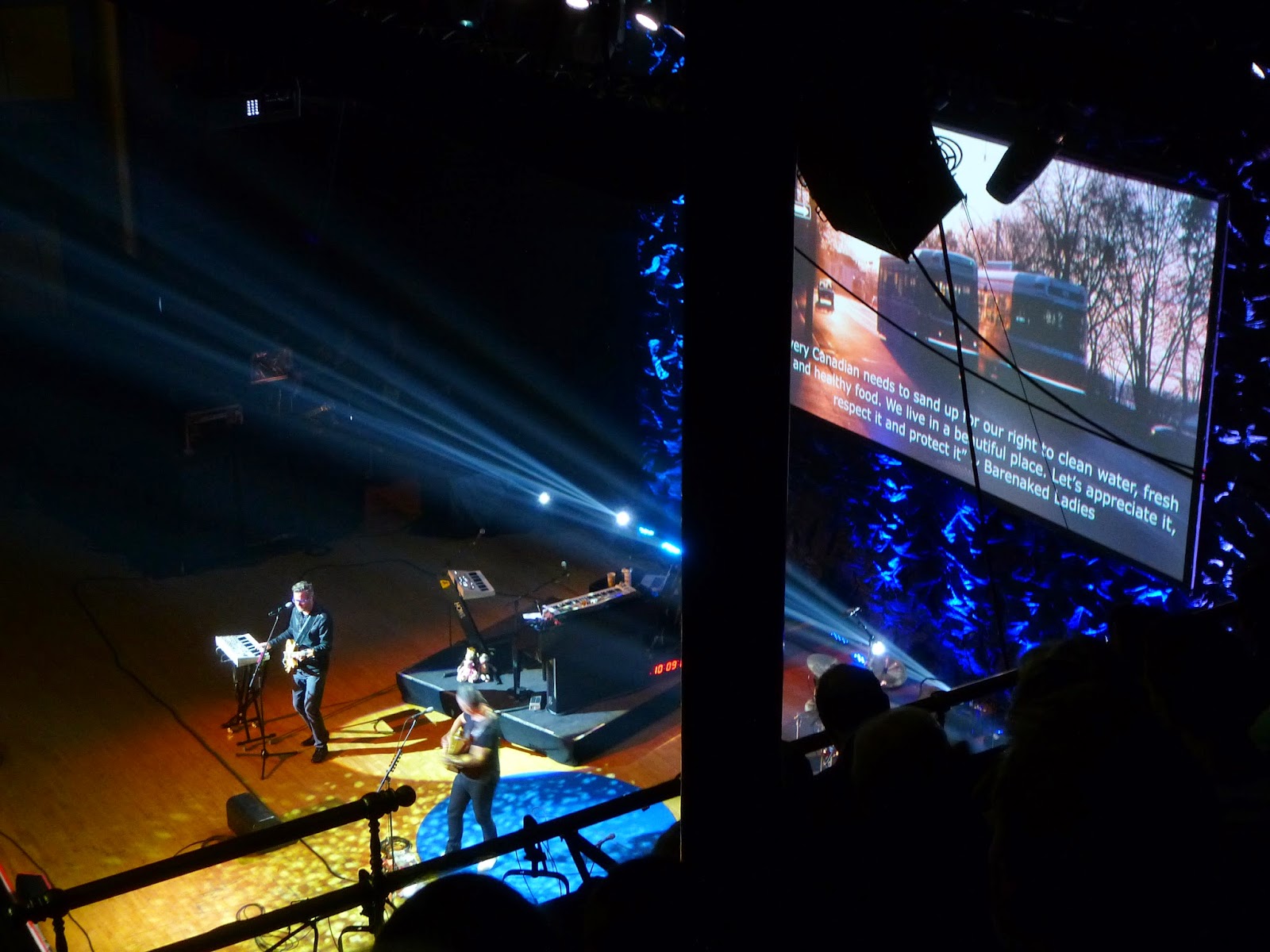 The Barenaked Ladies gave a lively performance, including jokes about new streetcars that had been new for almost 30 years, and a slightly-modified version of "If I had a Million Dollars" where they take an electric limousine instead of walking, and install solar panels on the roof of a treehouse to power a paintball/pinball (?) machine. 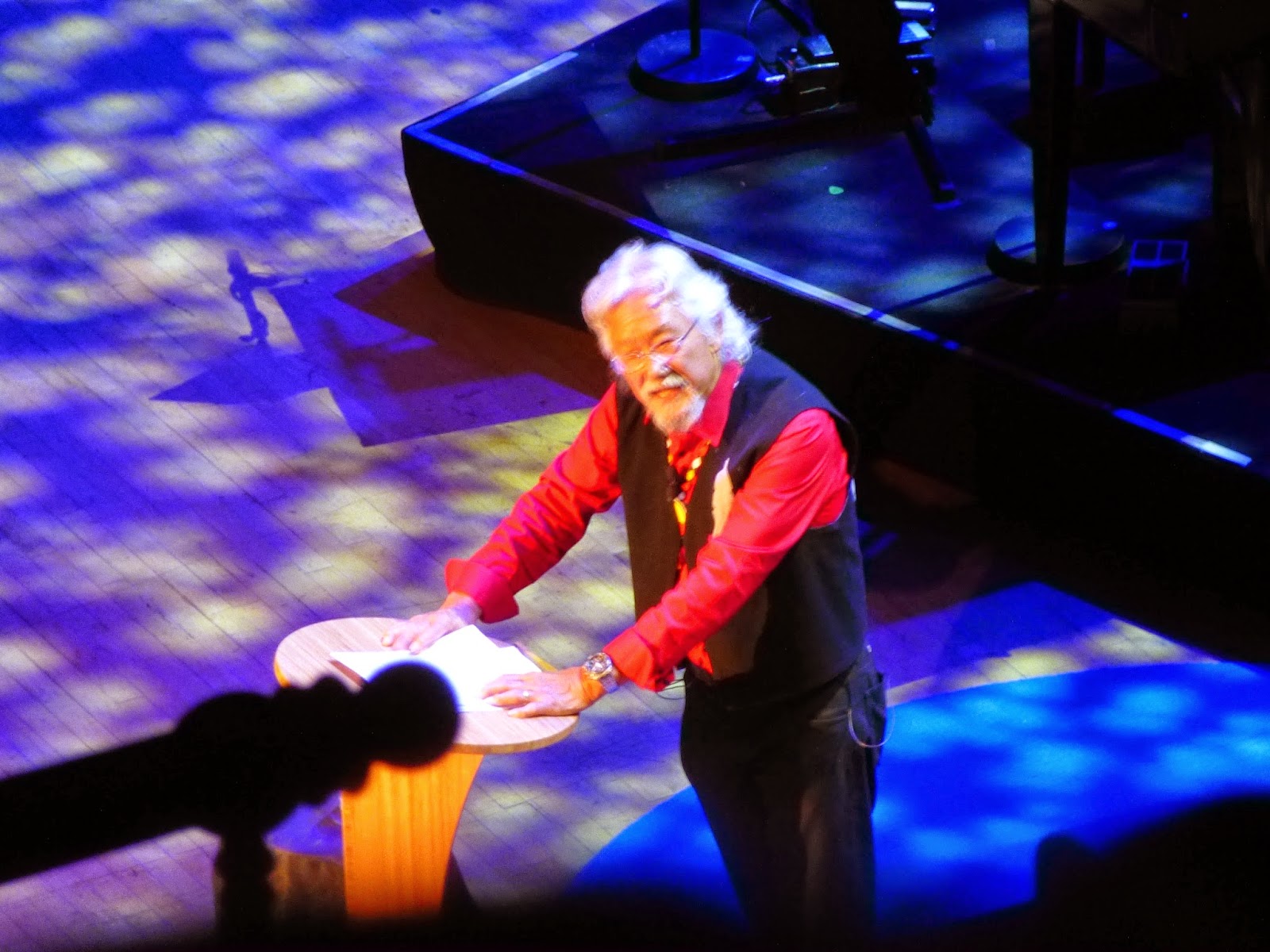 Last and certainly not least was David Suzuki himself. Of the many inspiring pieces of wisdom he shared, these are a mere few (This list will probably be added to later). Elders hold a special place in communities, and as an elder, in his lifetime he has seen peoples' views of  rights change radically, and frankly right now Canada is way behind in changing its views of the environment for a sustainable future.
In the past people have often lived learning to prioritize money and resources, at the same time having rights prejudice to only certain people. This is in contrast with the rich diversity that characterizes Canada which must be protected with the air, water, and land. He highlighted Native Canadian traditions, including the time he spent with Haida people, and the way that in traditional Native culture nature is sacred, such as the four elements water, earth, air and fire. Humans have huge effect in the ecosystem and like other living things depend on it for our health, and we must take a stand to have a healthy environment, and by default health humans, protected as a right. 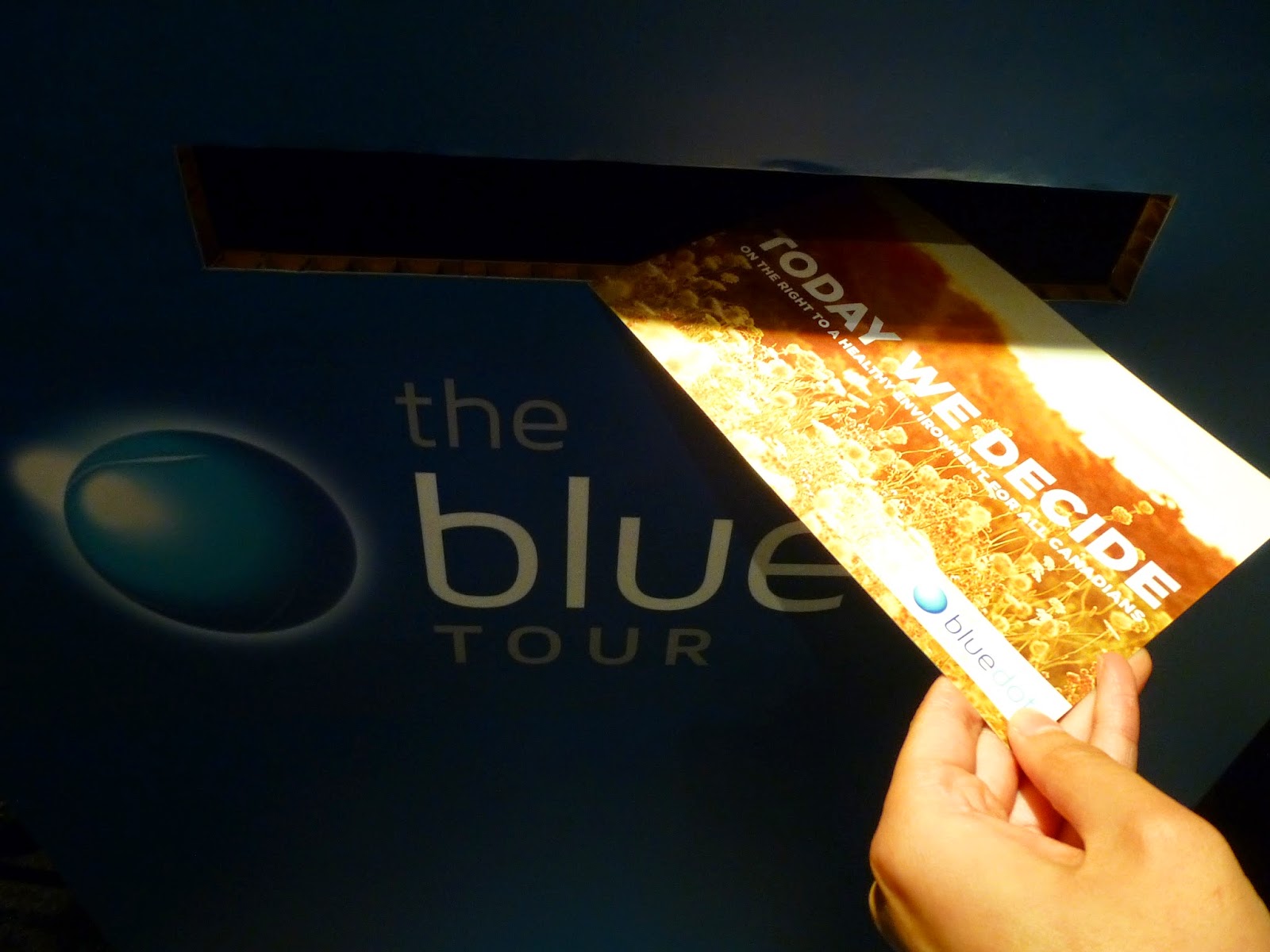 "Things are only impossible until we decide that they're not anymore. Today is the day we decide"

In our programs we were given cards that say "today we decide" on the front. We could fill out the cards with our name and information to join the movement (and a small box to write down why) and drop them into a big blue mailbox.
If you would like, you can visit the David Suzuki Blue Dot Tour website under "Take Action" to read more about the join the movement towards rights to a healthy environment. If we stand together to carry the weight of the world on our shoulders, it will be far less burdensome.