On Tuesday February 5, 2013, Asia Pulp & Paper announced their new Forest Conservation Policy in favour of Indonesia’s rainforests. After much pressure from the public and NGOs who launched a campaigns against them for large-scale clearing of rainforests, their ‘Sustainability Roadmap’ plan includes ending all further development on forested land (including peat forests), reducing greenhouse gas emissions, NGO monitoring, and conflict resolution with communities affected by the development. The campaign against APP was largely publicized by Greenpeace in 2010 which was joined by numerous other organizations and rallied thousands of international supporters from the public who participated through letter-writing and online petitioning. Companies that cut ties with APP after the exposure include KFC and Mattel, and others such as National Geographic confirmed that they would not buy from them.
It great to hear that the Indonesian Rainforests and all the animals living within them (including but not limited to orangutans, great hornbills, and Bengal tigers) are no longer threatened by APP. Rainforests also provide the planet’s atmosphere with much-needed filtration which every living thing on the planet requires. Also, some resources in the rainforest have been used for medical treatments, and reservation of those resources are necessary for people suffering from such illnesses to be treated. Still, there is much to be done before the rainforest can be considered “saved,” and heightened public awareness and pressure may incite more progress.
Hopefully this is one of many more steps to be taken in conservation of rainforests. The campaign has raised a lot of public awareness and interest, with the orangutan and Bengal tiger shown as the faces of Indonesian rainforests. APP’s sister company under Sinar Mas, Asia Pacific Resources International (also known as “APRIL”), has been sent a letter, urging them to take similar steps to create a Conservation Policy of their own. It is evident that many consumers will pressure companies for “greener” products, and that it can be affective. With the heightened awareness through media and public participation, events like this may help give a boost in conservation. 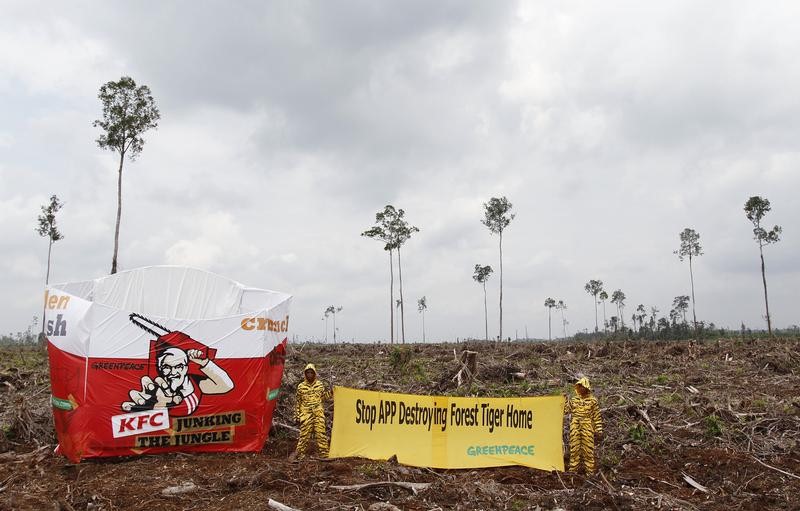 
*This is part of a series of older environmental news summaries.
Posted by Melody Tadeo