Harnessing Wind Power
Melody Tadeo
April 12, 2013
Mr. Wood
For generations humans have harnessed the power of the wind for various uses including transportation and a power source for processing resources in a windmill . Today, wind turbines are being used to provide roughly 1 per cent of Earth’s energy, being a source that is both renewable and highly controversial. The benefits and disadvantages of using this force to produce energy include benefits and damage to ecosystems, economic gain and risk, and social acceptance, with changing consideration as conditions change.
The Need for Cleaner Energy
What is generally considered the foremost important reason to use wind turbines to generate electricity is that it is a renewable resource. To generate electricity through turbines, after production there are zero pollutants emitted into the atmosphere (Nannette Richford, n.d.). With a growing need for alternative fuel sources, ‘clean energy’ that cause less harm to the environment through emission of pollutants and damage to natural ecosystems, wind power has become a well-known alternative that requires no fossil fuels to generate electricity. The depletion of is of great concern to people in nations around the world, and the need for renewable sources of energy grows with every barrel of oil extracted from the Earth. In 2010 America consumed about about 7 billion barrels of refined petroleum products and biofuels (U.S. Energy Information Administration, 2012), and about 19 per cent of the world’s energy is already provided by renewable sources, a number that is likely to continue to rise (BirdLife International, 2012). With more and more evidence suggesting damage to the environment because of pollutants —including man-made climate change— it becomes more and more clear that the human race must reduce emission of pollutants, and modify energy sources to meet a mandatory standard to minimize the consequences.
Wind Power Technology
The technology of using the wind to turn blades on a mill is centuries old, and a similar technology has been developed for the purpose of generating electricity through wind turbines. Before installing a wind turbine, a suitable sitting site must be selected. There are various factors that must be considered, including clear required land area without other structures blocking the flow of air, and ensuring that the area experiences enough wind to generate the maximum amount of energy possible (Clarke S., Rural Environment/OMAFRA, 2003). After the turbine is installed, it can begin collecting the wind’s kinetic energy with the blades of the turbine, mounted on top of a tall tower to take advantage of stronger and more consistent winds, with OMAFRA recommending a height of 24-37 metres. The function of the two or three blades is to gain lift from the motion of the wind, in turn rotating the blades. The rotation continues through the low-speed shaft and gearbox where the speed is optimized, to rotate the generator thus producing electricity. Wind turbines of various sizes are used to power individual homes and farms, or can also be attached to an electric grid system in conjunction with other wind turbines, often in large field where many turbines are placed in one area with some distance between them. Still, innovation continues are people are considering other possibly more efficient ways of producing more energy using wind power, such as a difference in size for larger and smaller-scale use, and using it in conjunction with other renewable sources of energy (Clarke). 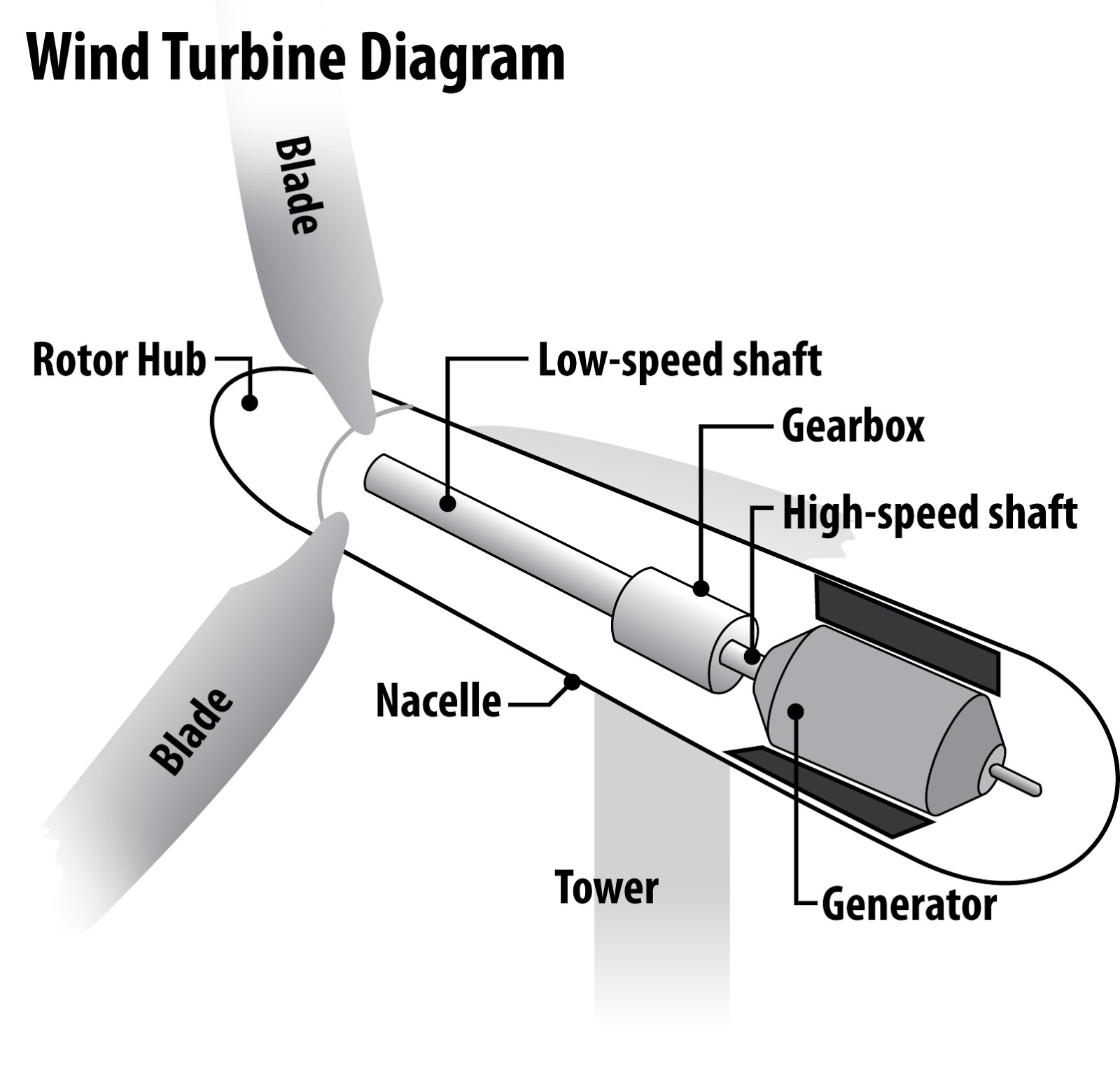